A manifesto for the future of Indigenous Education in Canada

In Reclaiming Anishinaabe Law Leo Baskatawang traces the history of the neglected treaty relationship between the Crown and the Anishinaabe Nation in Treaty #3, and the Canadian government’s egregious failings to administer effective education policy for Indigenous youth—failures epitomized by, but not limited to, the horrors of the residential school system.

Rooted in the belief that Indigenous education should be governed and administered by Indigenous peoples, Baskatawang envisions a hopeful future for Indigenous nations where their traditional laws are formally recognized and affirmed by the governments of Canada. Baskatawang thereby details the efforts being made in Treaty #3 territory to revitalize and codify the Anishinaabe education law, kinamaadiwin inaakonigewin. Kinamaadiwin inaakonigewin considers education wholistically, such that it describes ways of knowing, being, doing, relating, and connecting to the land that are grounded in tradition, while also positioning its learners for success in life, both on and off the reserve.

As the backbone of an Indigenous-led education system, kinamaadiwin inaakonigewin enacts Anishinaabe self-determination, and has the potential to bring about cultural resurgence, language revitalization, and a new era of Crown-Indigenous relations in Canada. Reclaiming Anishinaabe Law challenges policy makers to push beyond apologies and performative politics, and to engage in meaningful reconciliation practices by recognizing and affirming the laws that the Anishinaabeg have always used to govern themselves.

LEO BASKATAWANG is Anishinaabe from Lac des Mille Lacs First Nation in Treaty #3 territory. He is an assistant professor in the Faculty of Law at the University of Manitoba. Prior to beginning his academic career, Dr. Baskatawang served in the United States Army, where he completed two combat tours with distinction. 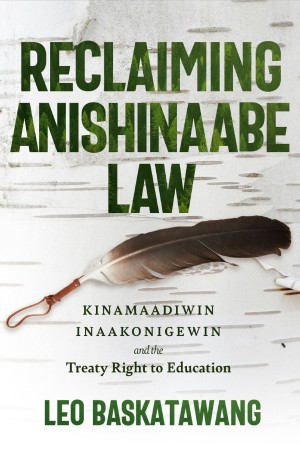