During the first half of the twentieth century, Winnipeg Beach proudly marketed itself as the Coney Island of the West. Located just north of Manitoba’s bustling capital, it drew 40,000 visitors a day and served as an important intersection point between classes, ethnic communities, and perhaps most importantly, between genders. In Winnipeg Beach, Dale Barbour takes us into the heart of this turn of the century resort area and introduces us to some of the people who worked, played and lived in the resort. Through photographs, interviews, and newspaper clippings he presents a lively history of this resort area and its surprising role in the evolution of local courtship and dating practices, from the commoditization of the courting experience by the CP Railway through their “Moonlight Specials,” through the development of an elaborate amusement area that encouraged public dating, and to its eventual demise amid the moral panic over sexual behavior during the 1950s and ’60s.

“This is an intelligent and highly readable account of Winnipeg Beach at the height of its appeal, a story of interest to both seekers and scholars of amusement.”

– Steve Penfold, author of The Donut: A Canadian History

“The back cover designates this book as ‘history,’ but, like the best social history, it offers much to a broad range of other disciplines, including women’s and gender studies, cultural geography, folklore, and cultural studies. Though modest in size and aims, Winnipeg Beach is a superb example of how a scholar fascinated with everyday life can link it with broader social movements.”

“Whether you have been to the area or simply lived through the period author Dale Barbour recounts, it’s worth a trip down memory lane to Winnipeg Beach. Behind the photos, interviews, quotes, and comparisons with other resort parks, Barbour offers social, moral, and even fashion history, making his book an informative and entertaining read.”

“There used to be a rollercoaster at Winnipeg Beach. Built in 1919, it perhaps caps what the beach on Lake Winnipeg meant to thousands of people who took the train or drove up to get away from the big city, if just for a few hours. The sights and sounds along the summertime boardwalk and night-time dance hall put Winnipeg Beach on the map. Now, as former journalist Dale Barbour writes in this well-researched history, the former Coney Island of the north has become better known for its focus on the lake, quiet cottage life and retirement opportunities.”

– The Cottager Magazine: Lake Living in Manitoba and Northwestern Ontario

“The popular song “Summer Nights” from the musical Grease recounts, in dialectical fashion, a young heterosexual affair at the beach in the late 1950s. In delightful interplay of form, content, and expression, the song cheekily relays a polysemous message designed in part to cast a critical eye on social attitudes toward youth culture, particularly those tied to sexual identities. Through the potent juxtaposition of gender, class, and ethnicity, the song playfully uses tensions in these social categories to evoke a nostalgic “summer dream” space, a boundary zone in which differences seemingly melt in warm nights of young love. But by dividing the song so it is sung in a back-and-forth manner by the male lead to an all-male chorus and by the female lead to an all-female chorus, an overarching discourse of heterosexuality is being stamped upon this summer leisure zone. However, because it is done with such insistence, it signals that heterosexuality might not just be under threat but be a fluid identity. A message likely not lost on early 1970s audiences, when the musical debuted. While no one is going to confuse the boardwalk of Winnipeg Beach for Rydell High School, that does not mean that performances similar to ‘Summer Nights,’ with slightly different production values, did not regularly occur in the resort town eighty kilometers (fifty miles) north of Winnipeg. Thanks to Dale Barbour’s entertaining and thoughtful monograph, one gets the chance to hear what youthful heterosexual romance and its accompanying homosocial policing sounded like off Broadway.”

“Written by one who had experienced its joys himself, Dale Barbour recounts its beginnings to ends via morality in the 1960s vividly. Winnipeg Beach is a strong pick for those curious about American and Canadian leisure in the first half of the twentieth century.”

“What makes Winnipeg Beach such an innovative treatment of this resort area, however, is Barbour’s conscientious effort to document and analyse how leisure and courtship evolved over time at Manitoba’s most culturally diverse resort area. Equally important, the author did not shy away from integrating new sources such as interviews from the Gay and Lesbian Historical Project into the subject.”

“Dale Barbour’s incisive work examines the ways Winnipeg residents spent their off hours in the early twentieth century. From an undeveloped stretch of shore grew a vital meeting place where the issues surrounding race, class, community and especially gender were played out under the banner of recreation. The book takes an insightful look at this microcosmic community, and reveals the social implications inherent in simply stepping foot on the boardwalk of Winnipeg Beach.”

“Winnipeg Beach transforms what could have been a dry, narrow tranche of Manitoba scholarship into a vivid, skillfully assembled portrait of early 20th century courtship. By way of anecdote and excavation, Dale Barbour’s evocations inspire nostalgia but also encourage us to see our own cities as geographical caches of neglected history.”

“This study will find readers from across historical fields. Historians of travel, tourism, and leisure, as well as those who study gender, sexuality, and the environment will discover much about the social and cultural histories of Winnipeg Beach.”

“A well-written and -researched history of Winnipeg Beach that is accessible to all interested readers.”

Dale Barbour grew up on a farm in Manitoba, and worked in journalism and communications before getting hooked on history. He completed his PhD in history at the University of Toronto in 2018 and is currently the University of Winnipeg’s H. Sanford Riley Postdoctoral Fellow. 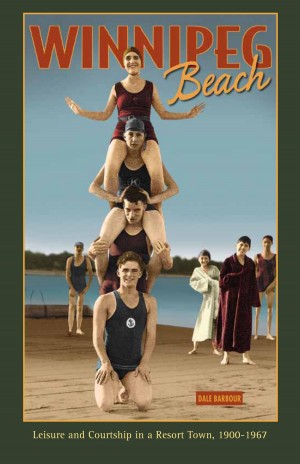