The Counselling Speeches of Jim Kâ-Nîpitêhtêw

Jim Kâ-Nîpitêhtêw was a respected Cree Elder from Onion Lake, Saskatchewan, who spoke only Cree and provided these original counselling discourses. The book offers the speeches in Cree syllabics and in Roman Orthography as well as an English translation and commentary. The Elder offers guidance for First Nations people in these eight speeches that cover the proper performance of ceremonies, words of encouragement for youth, information about collecting medicinal plants, directions for proper behaviour of men toward women, proper preparations for the Pipe ceremony, the role of the Pipestem in the Making of Treaty 6, the importance of tobacco, and examples of improper ritual behaviour in ceremonies. One of the most important speeches is the narrative of the Cree record for the treaty negotiations that took place in the summer of 1876. It was originally transmitted by Jim Kâ-Nîpitêhtêw’s father directly to him and the authors comment on this remarkable chain of transmission. The book contains a Cree-English and an English-Cree Glossary. This is an important resource for Cree linguistics as well as those interested in understanding the Cree perspective of Treaty 6. 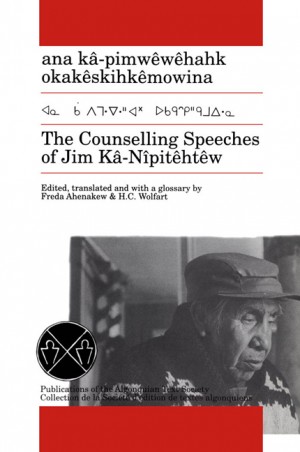