In 1941, Angeline Williams, an Anishinaabe elder left her home on an island in the St. Mary’s River between Michigan and Ontario and travelled south to North Caroline to teach the Ojibwe (Chippewa) language. At the Linguistic Institute, a summer school of linguistics, Angeline Williams spoke words and sentences and told anecdotes and stories to give the students practice in transcribing an analyzing the structure of an unwritten language.

The Dog’s Children includes twenty stories dictated to the class and the teaching staff, Charles F. Voegelin, and Leonard Bloomfield, as later edited by Bloomfield. The manuscript from which this edition has been prepared is now at the National Anthropological Archives at the Smithsonian Institution. The volume also contains an Ojibwe-English glossary and other linguistic study aids.

Angeline Williams was born at Manistique, Michigan, on the upper peninsula of Michigan. Her home when she worked on these texts was Sugar Island, just east of Sault Ste. Marie, Ontario. This publication of some of her contributions to the study of Ojibwe is offered to honour her memory.

Leonard Bloomfield was an American linguist who led the development of structural linguistics in the United States during the 1930s and the 1940s.

John D Nichols is a professor emeritus at the University of Minnesota. 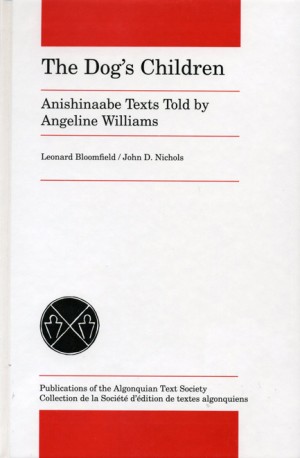