They Knew Both Sides of Medicine

Born in 1912, Alice Ahenakew was brought up in a traditional Cree community in north-central Saskatchewan. As a young woman, she married Andrew Ahenakew, a member of the prominent Saskatchewan family, who later became an Anglican clergyman and a prominent healer.

Alice Ahenakew’s personal reminiscences include stories of her childhood, courtship and marriage, as well as an account of the 1928 influenza epidemic and encounters with a windigo. The centrepiece of this book is the fascinating account of Andrew Ahenakew’s bear vision, through which he received healing powers.

Written in original Cree text with a full English translation, They Knew both Sides of Medicine also includes an introduction discussing the historical background of the narrative and its style and rhetorical structure, as well as a complete Cree-English glossary.

“An amazing book … while Alice Ahenakew is talking, you want the stories to just keep coming.” 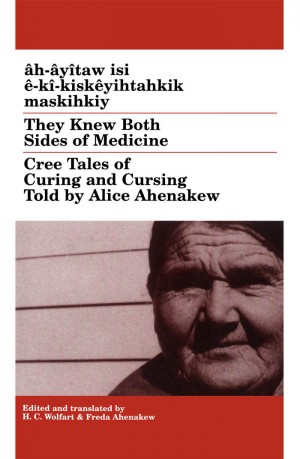